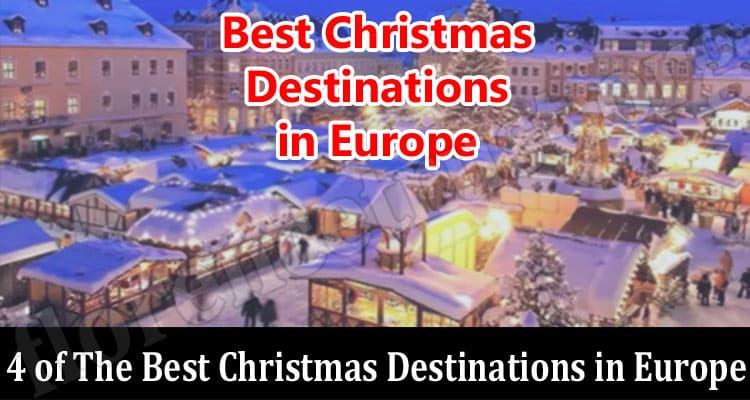 Christmas destinations in Europe: Sick of the constant grey and drizzle? Is it putting a damper on your Christmas mood? You’re not alone and this year is set to be a blockbuster year for overseas Christmases. And let’s be honest, Europe does Christmas really well. From the twinkling lights of (actual) German Christmas markets to idyllic cities in France and Austria, they’re a sure-fire way to brighten up your festive period and give you a much-needed break.

Save money whilst doing it! Browse various easyjet NHS discount codes and explore what the continent has to offer without breaking the bank!

It only hosts one of the world’s most famous Christmas markets! Nurembourg has built a reputation for itself as being one of the best spots to spend Christmas, drawing thousands of tourists to its twinkly streets and rustic stalls every year. Medieval Cathedrals cast their gothic spell over the city which glitters merrily under the thousands of fairylights and the illuminated characters that adorn the streets.

Don’t miss the market itself and sample some Nürnberger Lebkuchen or a Nuremburg Bratwurst and wash it down with some mulled wine.

Stuttgart and the Black Forest, Germany

Moving further south in Germany and we have the centuries-old Christmas markets of Stuttgart and the Black Forest. Picturesque Baroque architecture forms a dreamy backdrop for the mediaeval Mittelaltermarkt. Over in the Black Forest town of Gengenbach, the market is a 200-year-old spectacle, featuring a giant advent calendar whilst in Tübingen, Germany’s largest chocolate festival gets underway. The opportunities are endless in this region.

On the French/German border lies Strasbourg, the city with the oldest Christmas market in the whole of France. Showstopping light displays light up the streets whilst timber houses host thousands of twinkly lights, making for a winter wonderland fit for any romantic movie.

The largest of the markets is nestled under the imposing Notre-Dame Cathedral. Little stalls sell regional goodies like bredele cookies, traditional Alsatian honey gingerbread and plenty of hand-crafted souvenirs for you to take home with you.

The European capital of classical music, Vienna’s Christmas celebrations are melodic in nature. No other city hosts so many concerts. With beautiful Baroque churches every which way, they are suitably illustrious to host some of the best performers in the world. Catch the famous ‘Christmas in Vienna’ concert at the Wiener Konzerthaus or head to St Stephen’s Cathedral where there are back-to-back carol concerts.

They also know a thing or two about a showstopping Christmas market. Vienna’s historical palaces set the scene with Schönbrunn and Belvedere Palace hosting their own markets, each as jawdropping as the other.