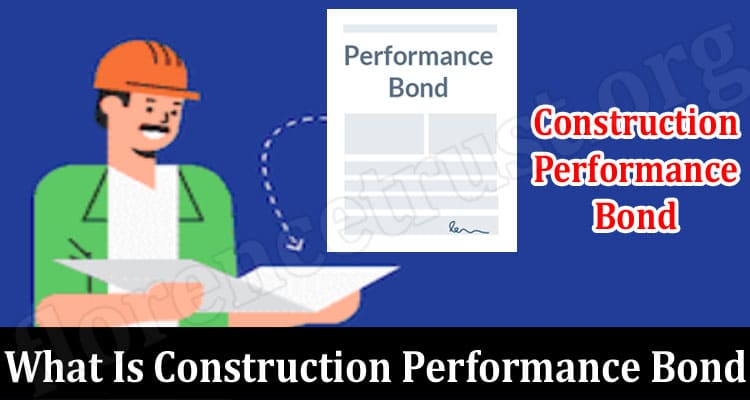 Construction Performance Bond: A performance bond, also known as a surety bond or performance security, guarantees a project’s successful completion. In the construction business, a performance bond is frequently used to protect clients from the risk that a contractor won’t fulfill their assigned responsibilities.

To guarantee their patrons that the project will be finished on time and following all requirements, contractors use a construction performance bond. These bonds will reimburse the investor for losses or damages sustained if they cannot do so due to unanticipated circumstances like insolvency and bankruptcy.

Components of a Performance Bond

A performance bond is made up of three distinct entities or parties, which are as follows:

In this case, the principal is the primary worker on the project. Most frequently, it could be a contractor who consented to the contract’s requirements.

The obligee is the client or party that contracts with the principal to do the service. It could be a person, a group, a government, or someone else.

For a Real Estate Development

Because the real estate sector faces many of the same risks as the construction sector, performance bonds are also frequently used in this sector. For instance, XYZ Property Management Services contracts with a developer to construct a new office building for its portfolio of properties in downtown Brooklyn, New York. As a result, the developer consents to finish the job and receives a performance bond from ABC Bank.

According to the contract, the developer must meet several deadlines to construct the office buildings. As per the terms of the agreement, XYZ Property Management Services will pay the developer following its advancement.

A construction performance bond and a construction payment bond complement one another. It guarantees a project’s successful completion. A payment bond guarantees that a party will pay all parties, including subcontractors, suppliers, and laborers, when the project is finished. Combining these two gives workers the right incentives to provide the client with a high-quality finish.

What Is Construction Performance Bond: Understand With An Example