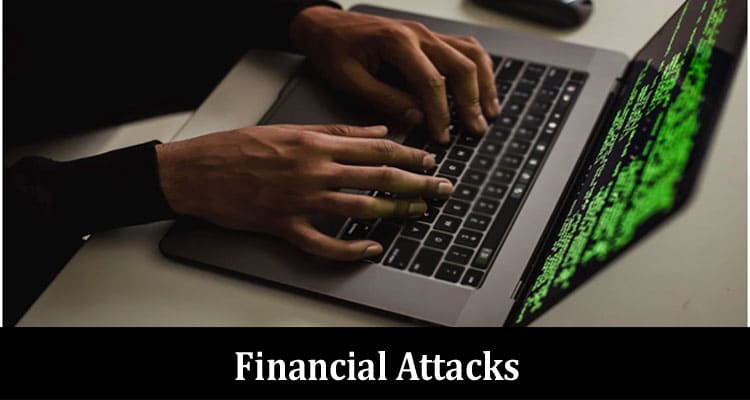 What type of individual comes into your thoughts when you think of a target of financial cybercrime? The truth is that anybody may become a victim. There are, however, various typical approaches that may be used. Financial cybercrime may damage businesses of all sizes and industries. Along with private persons, the effects might be serious.

But what are the different sorts of cyberattacks driven by financial gain, and how do we stop them from succeeding?

What Is Cybercrime in Finance?

We’ll take you through a cyber-attack before moving on to the other categories of cyber-attacks. Researchers refer to an unauthorized third-party system or network access as a cyber-attack. One who commits to breaking cyber security in banking is referred to as a hacker or attacker.

Finance attacks have several harmful consequences. A successful cyberattack may lead to information leaks that cause data loss or manipulation. Financial losses decrease consumer trust, and reputational harm results for organizations. Companies employ financial services cybersecurity to stop cyberattacks. The process of preventing unwanted virtual connections to networks, computer networks, and their constituent parts is known as cybersecurity. After learning what a cyberattack is, let’s examine the many forms of cyberattacks.

How Are Financial Attacks Divided Into Different Types?

Financial threats come in a wide variety of forms in the modern world. Knowing the different forms of cyberattacks makes it simpler for us to defend our systems and networks from them. You may use a private search engine for your security.  Here, we’ll take a careful look at the top financial cyber-attacks that, depending on their scope, might harm either a person or a significant corporation.

Hackers created a banking trojan program called Shylock to steal users’ banking credentials and utilize them fraudulently. As long as it is downloaded, Shylock starts to exchange data with the hackers’ external Control and Command servers, transmitting and receiving information from and among the infected PCs. Similar to Zeus Gameover, this virus generates several domain names using a (DGA) Domain generating algorithm, which may then be used to send orders to the malware from the dangerous combination.

GozNym was a hybrid financial trojan that began by attacking Polish banks but quickly moved around the globe, spanning Canada to Japan and Spain to Brazil. Its hackers stole login passwords from its victims’ internet banking accounts, then took the money and laundered it via American and overseas beneficiary bank accounts.

Kronos financial software is a powerful Trojan in which code is disguised in various ways. Kronos, like Zeus, focuses on capturing commercial bank login details from internet sessions by combining internet injections with keylogging and targeting nations such as Poland, Germany, and Japan. According to recent antivirus research, Kronos has been renamed and is now offered as the Osiris Trojan Horse.

How Does a Person Become A Victim Of A Financial Attack?

The most harmful financial malware is often spread through spam operations.

The user gets an e-mail text from an established organization that contains bogus banking information or even a link. The system gets attacked when the user opens the link or installs the attached file to the email, commonly presented as an essential payment or permanent job.

A drive-by download happens when a person visits a site or clicks on a misleading pop-up window. Other well-known scams include cryptocurrency and love frauds, in which individuals are targeted via common accounts on dating websites or prominent social networking sites to form connections, leading to the fraudsters requesting money transfers while preying on the victim’s emotions.

People of any generation who fail to adhere to a VPN-safe security best practices are substantially more likely to become victims of cybercriminals. Poor and repeating passwords are two of the most prominent risk factors.

The Use of a Free VPN

Many free VPNs do not shield you from every attack, indicating that they are not a one-size-fits-all solution. Even if you use a VPN, you are still vulnerable to social engineering attacks such as phishing schemes. Be sure of VPNs that offer a free trial.

Methods to Avoid Such Financial Attacks

Maintain the Safety of Personal Data and Technological Devices.

Check to see whether your software is up to date. Intelligent cyber security in banking is required whenever your company is at risk of malware attacks. Upgrading the antivirus, browser, and system software to the latest versions is important. It will help if you run frequent software upgrades on your devices to keep attackers from obtaining access to your information or contaminating them with malicious malware.

Use the Best Virtual Private network.

Some VPN providers do provide extra banking data security. VeePN, for example, contains an ad blocker, anti-malware technology, and a DDoS protection tool. This VPN is stronger than others, yet even the finest services are sometimes restricted.

Make sure your password is safe. Consider the safety of your passwords. A secure password must have at least 12 digits, which may include letters, digits, and special symbols. Ensure you use a different username for multiple accounts.

The effects of a successful financial attack may be severe and devastating to an organization. Large quantities of money lost may have a big influence on the firm’s economics and can result in bankruptcy in the worst-case scenario, particularly if the business is tiny. In certain ways, the struggle against financial cybercrime should interest everyone. Consider it an obligation to do everything you can to assist in halting illegal conduct on the web by helping the fight against it.