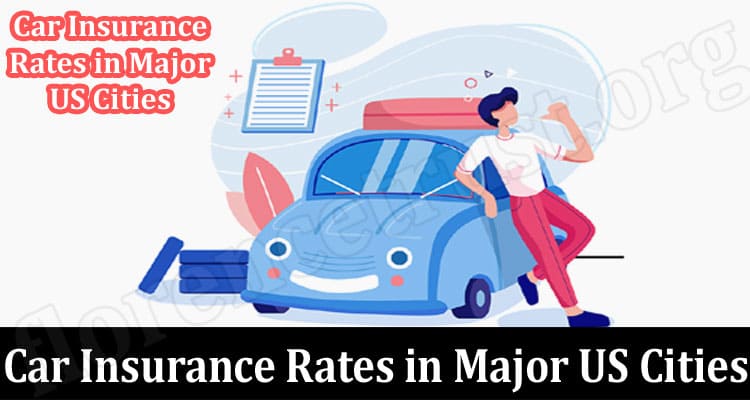 Car Insurance Rates in Major US Cities: Read the content below to get complete details on updated car insurance.

There is a saying that if you can drive in Downtown Los Angeles, then you can drive anywhere else in the United States. The biggest cities are where the most care is required when behind the wheel. Traffic is amplified by the large population, and more drivers are naturally on the road. In turn, you can expect car insurance rates will also be amplified when in metropolitan areas. Since some of the cities in the US are bigger than others, car insurance rates differ across the board. This post looks at ten of the major US cities and their average car insurance rates.

Car insurance is required for all drivers in the majority of the United States, which is not too different from some countries in Europe. Not just every city but every state’s population and traffic are different. So car insurance rates can be really diverse. With a zip code, an insurer can gauge such things as population, traffic, crime rates, and more about where you reside as a policyholder. They can find the biggest cities and the smallest towns and assign rates accordingly. For intensive purposes, let’s look at the cities with the highest car insurance rates.

When it comes to car insurance rates, Philadelphia stands out from the rest of the state of Pennsylvania. The city is a historic destination with a population of over one million and insurance rates that are around 17% more than the state average at about $2,041 annually. Compared to the national average of $1,630 –that’s nearly 50% greater. Some rates for full coverage in Philadelphia have been reported to cost over $3,000  in some cases. Again, this accounts for traffic and crime rates.

Cities with a lot of residents aren’t the only ones that can rack up car insurance premiums. Cities, where tourism is one of the main businesses, are known to have higher car insurance due to the seasonal or year-round influx of visitors. Anaheim, where Disneyland is located, is an example wherein it has some of the highest car insurance rates in California. Las Vegas functions the same way within the state of Nevada, with annual car insurance averaging around $2,045. Vegas sees visitors from around the world every day and several drivers in gridlock on the Strip. The average visitor to Vegas doesn’t even get a car; they elect to use taxis and Ubers. However, those that live in the city and have to drive around must contend with such insurance rates.

St. Petersburg in Florida is one of the sunniest parts of the United States, located on the Pinellas peninsula, not too far from Tampa. It seems like a random city on this list, at least until you look at the population of over two million in the Tampa-St. Petersburg-Clearwater area. Insurance rates here are pretty close to that of Las Vegas, with annual rates of an average of $2,052 –about 54% higher than the national average. You will notice a lot of Florida cities on this list for similar reasons.

The capital of Louisiana has a population of close to one million and some of the most costly car insurance in the state because of it. At 65% higher than the national average, it costs about $2,242 annually to insure a car. Even so, the lowest car insurance rate possible for a Baton Rouge driver is around $1,327. Crime rates in this metropolitan area are also a considering factor to the car insurance rates.

Not too far from St. Petersburg in Tampa, where the car insurance rates are only higher. It’s nearly 80% greater than the national average of $2,373 annually for auto coverage. As previously mentioned, the Tampa metropolitan area is one of the most populated areas in Florida, with several drivers on the road. Most of Florida’s professional sports teams have their home here, so there is always an influx of traffic throughout the year.

The Miami area isn’t just one of the largest populous cities in Florida; it’s one of the major cities in the country. Naturally, to compensate for the population of nearly seven million people in the metropolitan area and crime rates with high car insurance premiums. Here, annual car insurance rates average at $2,427.

The city hub of New Orleans is a unique cultural destination with even higher car insurance rates than Baton Rouge, not too far away. This is simply due to the larger population and crime rates of New Orleans. With annual events and periodic tourist flare-ups, the average rate for annual coverage is about $3,166.

Naturally, the largest city in the United States will have some of the highest risks when it comes to driving. You can’t drive anywhere in New York without getting stopped or honked at. That’s why several residents forgo owning a car in the first place since it just wouldn’t be practical. If you were to become a regular New York driver, you’d be looking at car insurance rates of nearly $4,000 a year –that is just scary.

The worst place to drive and own a car is actually the Motor City of Detroit. Known for their unique crime rates, Detroit car insurance rates reach a whopping $5,182 a year. That is nearly 300% more than the national average –truly insane.

Car Insurance Rates in Major US Cities – All Details